The Malay Peninsula is the southern most point of continental Asia. On the southern half of the Malay Peninsula sits the country of Malaysia. Off the southern coast of Malaysia is the island city-state, Singapore, now a vast metropolis. Singapore is the home to Lampropelma violaceopes, described by Abraham in 1924: “The specimens on which observations have been made have all been collected in mangrove swamp, and have in every case been found to be inhabiting hollow Nyiereh trees (Xylocarpus) noluccensis M. Roem), the hole being lined with a thin but strong sheet of silk.” [1] Abraham’s report of L. violaceopes beyond Singapore may need confirmation. The male he deposited (Penang, 2000 ft. elevation) has recently been shown to be Omothymus schioedtei.* [2] 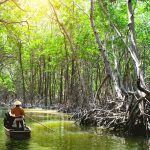 At certain angles the violet color for which this species was named can be impressive. According to Abraham, violet coloration is most evident post molt and least evident pre molt.

Reports of females reaching 9 inches exist, though I have not witnessed it. A disturbed L. violaceopes may rear up and stridulate. It can turn and bite faster than one can react. It is not a species to be held. Intermediate-to-advanced keepers only please.

Humidity in the Malaysian capital city Kuala Lumpur hovers around 80% year round. Temperatures are typically high 80s to low 90s, but monthly temperature minimums reach the low 70s. In captivity, young L. violaceopes will construct a web hide at substrate level, attaching web to adjacent enclosure wall and bark. Keep yours warm, humid, and well-fed. Avoid damp or wet substrate. You will be rewarded with marked growth to a sizable adult in only a few years.

*Gabriel and Sherwood (2019) re-examined Abraham’s 1923 female (Singapore) and male (Penang) and concluded the latter was misidentified Omothymus schioedtei. The World Spider Catalogue has accepted their transfer of L. violaceopes to Omothymus. [2]