Pterinochilus murinus has had a major impact on the tarantula-keeping hobby. The species has been known to science for over a century, and has been part of the hobby since the late 1990s at least. The hobby has grown since then, along with a steep increase in keeper sophistication.

Tan, brown, red (orange), and dark grey color forms have been introduced over the years. These naturally occurring color forms, or color variants, come from different regions of east Africa. Whilst some refer to these as color forms (TCF, BCF, RCF, and DCF respectively), different regions have already produced slightly different shades of a given color. It is immediately apparent that moving forward, region-based names make the most sense. Fortunately, most overseas breeders have risen to the challenge and provide locality information appended to the name. Thus we have P. murinus “south Kenya” (TCF), P. murinus “Tete, Mozambique” (BCF), P. murinus “Kigoma” (DCF), P. murinus “Mikumi” (DCF), and P. murinus “Botswana/Zimbabwe” (DCF) respectively. The last variant, “Botswana/Zimbabwe” is a uniformly dark grey variation on the DCF theme.

The variant offered on this page, P. murinus “Usambara” (RCF) is from the Usambara Mountains region in northeast Tanzania. It is bright orange throughout, and by far the most popular color variant. It is easy to find, keep, and breed. The orange is stunning, unlike that of any other tarantula in the hobby. Take heed however, for this species is defensive, evidenced by a ready tendency to rear up and strike the offender. 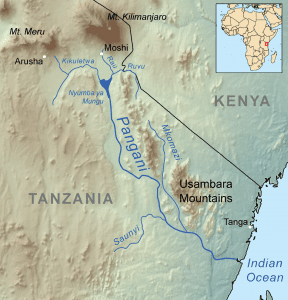 The spiderlings offered on this page have been grown out to 1″.

The photo above is of an adult female.